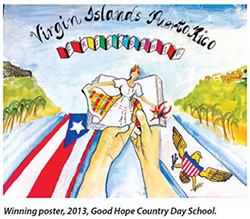 ST.THOMAS — Gov. John deJongh Jr. rolled out the red carpet this year to welcome the BVI delegates for the 41st USVI/BVI Friendship Day.

USVI/BVI Friendship Day is an opportunity for Virgin Islanders to reflect on the close ties that bind the two territories together. It was designed to strengthen and build upon the bond of friendship, history and shared cultures of the Virgin Islands. The theme of this year’s Friendship Day was “Ole Tyme Tings – Celebrating the Ties that Bind Us!” When the Friendship Committee said “Ole Tyme” they really meant it. There were Long Johns, local passion fruity and peanut punches and mini pineapple tarts. There were also coal pot demonstrations.

The event was comprised of two days of activities. Friday night was scheduled for a fast pitch softball game down at the Emile Griffith Ball Park between a team from the USVI and one from the BVI. Saturday, however, was the main event – A Cultural Presentation – dedicated to the BVI delegation.

The community watched Saturday morning as the BVI delegation was welcomed to the presentation with a parade that led to a dessert sampling of different traditional pineapple, coconut and guava tarts, as well as Vienna and chocolate cakes. The welcome parade was followed by breakfast for the general public on Dronningens Gade while the delegates had their breakfast upstairs at the Grand Hotel Galleria.

“In many ways, USVI/BVI Friendship Day is like a family reunion. Our brothers and sisters in the British Virgin Islands share a bond with us that are unlike any other, and while they live so nearby, these special occasions provide us with an opportunity to commemorate our shared history and culture as we continue to work closely in the best interests of both territories,”Gov. deJongh told The Daily News.

Cecilia Henry, one of the vendors, enjoyed the performances. She said she was even able to run away and buy some things from the farmers market they had set up.”

The event lasted from 9 a.m. – 2 p.m. and people who were in attendance were given gift bags.

“Despite the rain, it was a good day. The BVI delegates enjoyed this special day dedicated to them. I can’t wait to see what they have in store for the USVI delegates next year,” Dawn Simon, Friendship Day committee member said.

The USVI/BVI Friendship Day was a success. It is something that the community can look forward to every year whether it is in the USVI or the BVI.