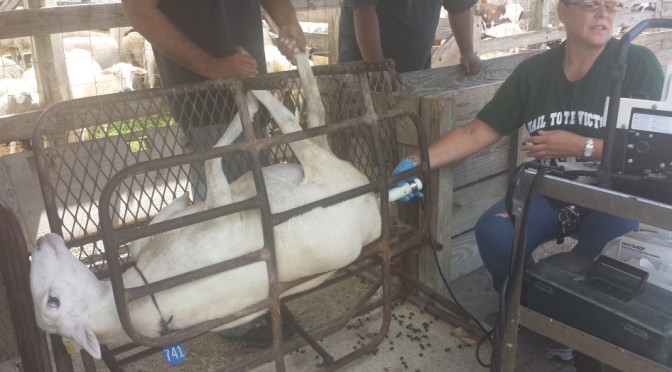 ST.CROIX — It’s Wednesday again down at the farm. Ismael struggles to hold the yolk down as research analyst, Sue digs her finger into its anus to remove the feces. Sue then inserts the lubricated probe into the goat’s vagina which is connected to an ultrasound machine and watches to see if they are pregnant. This is part of the weekly routine at the field.

After that process is complete, Ismael places the sheep on the scale so Sue can check and record their weight. The latter process of Wednesday’s routine entails digging out the other sheep’s poop and injecting them to get a blood sample. The poop and blood sample is saved to be taken into the lab to be tested for tape worms. This procedure is not done on every sheep each week. It is done periodically, at set intervals of ages or set intervals of time.

All this action takes place on a regular basis at University of the Virgin Islands (UVI) in the southeast corner of the St. Croix campus in the field near the nursing classes. This area is called the “Animal Science Department,” where the sheep and even dogs and donkeys are kept.

UVI is a land-grant, Historically Black College and University (HBCU). This allowed establishment for the Agricultural Experiment Station. The Animal Science Department is a research area under AES. The Animal Science Department passes on information to the Cooperative Extension Service (CES) and then CES disseminates the information to the public and deals directly with the farmers.

“The other aspect of the land-grant college that we don’t have is the educational side which would be classes in agriculture,” Sue Lakos said. “We would love to see an agriculture program come in.”

There are a several flocks down in the field. This includes two different breeding flocks, an ‘A’ flock and ‘B’ flock; these are the female sheep with their babies. They also keep a batch of the males, called the rams, and two separate wailing flocks, one male and one female. The breeds of sheep in the flock are St. Croix White and Dorper.

There are set breeding seasons. The A and B flocks are managed on eight month cycles to produce three lamb crops every two years. There is a five week breeding period.

Amran Nero is a student worker in the Animal Science department for Agricultural Experimental Station (AES). He enjoys his job working with the sheep down in the field. He has an assigned project in which he measures and documents the heat temperature of the pregnant and lactating yolks.

“You take a probe with a date entry on it, it has a battery inside of it, then you lubricate it and insert it inside the yolk’s vagina,” Nero said. “Every two hours, you need to check to see if the probes fell, because sometimes they do fall out, especially when the yolk is pregnant.”

The probes stay in the yolks for one week. This project is done twice per semester. It was done in February and will be done in April this semester.

Not only does Amran work with the sheep, but he also does maintenance work around the field such as fencing, cutting trees and feeding the animals.

“My job is challenging, but it helps me to grow personally and professionally. It is also very hands on and I like that about it,” Nero said.

AES conducts research in order to improve livestock production and then to pass on this information to the farmer, in order for them to make more money. One way they do this is by conducting parasite studies because there are currently a lot of worm issues. Having at least a few parasites in the sheep is crucial. This is because the parasites you do have can become resistant to the wormer.

The wonder of an AES job is getting the feel of both work and class. A lot of research is carried out in these jobs, which makes it feel like a lab. It is also a hands-on job, therefore it entails a lot of interaction.