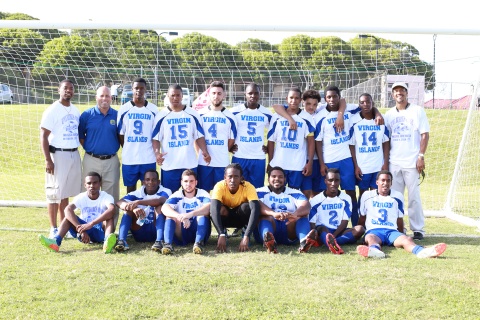 On the Road with Coach

We’re driving to a three o’ clock game in Mayagüez, Puerto Rico, a town of decrepit wooden and metal homes in the rolling hills, three and a half hours from the steel bar hugging doorways of apartments in the city of San Juan, Puerto Rico. Coach David Santesteban  is leading the University of the Virgin Islands soccer team to a historic season, but the traveling situation for the team has eight, athletic, determined university men squeezed inside one rental van.

“This is unreal!” Coach Santesteban yells, directing a hand and his voice towards traffic in Puerto Rico.

Speeding down the road, assertive with controlling traffic towards his favor , coach commands traffic. Coach speeds up the van, taking what little space he has in traffic and running with it.   Suddenly he switches lanes in order to follow the lead van of soccer players from St. Thomas, and instantly becomes agitated.

“Unreal!” Coach Santesteban yells out into the air again.

It’s because after only three games traversing this island in a soccer convoy, he believes he knows this island like the back of his sun tanned hand.   With experience playing the forward position in soccer professionally for the San Jose Oaks and San Francisco Diablos, scoring is second nature and winning is the ultimate goal. Now,  although Coach Santesteban is a man of faith and pride, leading a young team filled with heart and ability, among the multiple things that annoy coach within a given day, following another car going in a circle is a big one.

The University of the Virgin Islands needed someone with vision to spearhead the development of the soccer program after the completion of their new home field, but the result of what they’ve gotten in seven games has been historic. For the first time ever,  the University of the Virgin Islands has made it into the post season.  He’s a man with a last name that almost nobody on island can pronounce correctly at first try, but normally everyone just calls him coach. Only weeks from leaving his family temporarily in Houston, Texas, driving around island he’s already greeting folks on St. Croix with a honk.

Coach is a religious man, which fits in with the Caribbean culture. He dresses sharp in his Sunday best clothes, and has dreams of new uniforms and boat shoes for his players. On countless occasions he’s chastised his players about how to properly behave in public.

“We’re all in a fishbowl!” Coach preaches to his players after a win on the road in Puerto Rico.

With a resume that displays a culture of success, coach understands how champions should present themselves, constantly comparing his team to Real Madrid, explaining how professionals behave themselves. With a team filled with upper-classmen, and lower-classmen at various skill levels, it has been coach’s job to get everyone on the same level, playing at the same speed. This is not an easy task for a coach, a month in to coaching at any university.

At the inaugural home game on Oct. 4, coach led the UVI Buccaneers to their first win on their new home field. With a team comprised of 15 men, the UVI soccer team is relatively small with aspirations towards a championship. Most of the other teams have a bench filled with six or more players at a time for substitutions, while the Bucs on average have only two. That means more playing time for tired players on the road. Despite all the hurdles on the way through the 2014 season, the Bucs have played through it all because of the passion for the game.

The passion that Coach  Santesteban (santa-stay-ban) brings to the field can be seen on the side line and in practice. For a coach who tries to abstain from yelling too much on the side line, sometimes he can’t help himself. On Nov. 1,  the Bucs played their first home game of the playoffs, but the refs didn’t give us home field advantage. By the 88th minute of the game, coach had enough with the refs and their bad time-keeping. Our players were kept on the field during a scorcher of a day almost 10 minutes longer than appropriate. In Spanish coach yells  that the ref was extending the game in the other team  favor.

Immediately the ref raises his hand and dismisses coach from the last supposed two minutes of the game. Although coach might not always get what he wants on this team, he gets what he needs. Coach in frustration , takes his leave from the field, not before stalling at least 45 seconds from the game clock.

At the end of that game,  which resulted in a 1-1 tie, coach didn’t have much agitation in his voice towards the players. He knew that this team played with the pride of an island on their back, and with that he knew he was at the right place. All that waits now is the future of Bucs soccer in the playoffs and next season. Already the team has been accepted to new tournaments, and new players have taken interest. Bringing coach Santesteban to St. Croix has brought needed to change the culture and image of soccer at UVI, but even the coach won’t let you forget about the talented players on the team who sacrifice their bodies and time on the field for the Buccaneers.