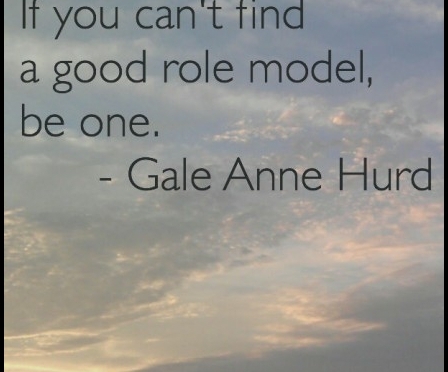 Some good, Some Bad, All Influential

A role model, as defined by the Merriam-Webster dictionary, is someone who another person admires and tries to emulate. A role model can influence impressionable youth to do right or wrong in their lives.

Many young children today see an entertainer, such as a rapper, singer or actor as a role model, and aspire to reach that height in their lives, not realizing that sometimes such a goal may not be very good for them.

Their successes give other children hope for the future, particularly those who do not see much good in their own futures.

According to Dr. Marilyn Price-Mitchell, a doctor of psychology at Fielding Graduate University in Santa Barbara, CA, there are five qualities that all role models should have.These are passion and ability to inspire, clear set of values, commitment to community, selflessness and acceptance of others, and ability to overcome obstacles. The ability of an individual to positively inspire others hinges on these characteristics. These traits also draw others to them, to admire them for their various accomplishments in life.

With media and technology always expanding and becoming far more accessible to the youth of today, all role models are not celebrities. They could simply be an individual with a small, but substantial following. Role models are not always positive, whether they are famous or not.

“Someone you can look up to that you want to model yourself after. A role model can be anyone because they are all sorts of influences in the community, but also social media as well,” said UVI freshman Eeeveta Charles.

A stereotype presented by the media and individuals today is the admiration of gangsters or rock stars by young, impressionable boys. This is not a stereotype. Those celebrities who commit crimes, endorse infidelity, and overall carry themselves in an undignified  manner can influence the new generation to commit similar, just as condemnable acts.

“The outlook of a role model should be that of a person who thinks, acts and reassures themselves and others that there is always a possibility to make good of a bad situation and also instils hope for a chance to succeed,” St. Croix Central High School teacher Jesus M. Espinosa said.

In addition to teaching, farming and assisting in marine biology research, he is the founder and head of Nature Environment Role Models.

“If anyone takes on the position of a role model, then they must be conscious of the responsibilities they carry. Role models have to be very responsible in their thought process and actions,”Espinosa said.

Role models will always be present in society. While others can get through life without such an influence, the presence is nonetheless there.

One thought on “Role Models”