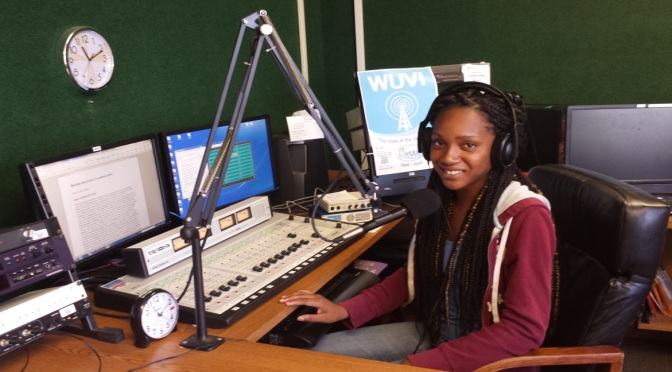 ST. THOMAS- After only one year of existence, the student-run college radio station,WUVI AM 1090, announces upcoming additions.

A new studio will be created on the Albert A. Sheen campus on St. Croix, where technology will allow both the St. Croix and St. Thomas studios to communicate with each other and  also to the transmitter.

This addition allows students to create and produce radio shows and go live on the air from St. Croix.

The first steps of the process are already in progress due to allocating and purchasing carpets to soundproof the prospective studio’s walls.

“We already host a number of shows out of St. Croix, using a cobbled together telephone system,” Dr. Alexander Randall, faculty advisor and professor of digital media communications at the University of the Virgin Islands said.

“Dr. Chenzira Davis-Kahina produces a show out of St. Croix that’s coming through telephone lines. With the new studio we’ll be able to do a really professional version of that.”

The prospective St. Croix studio is located in the former Research and Technology (RT) rooms of an on-campus dormitory.

The new studio will be funded by a five-year federal title III grant provided by the Department of Education.

The money afforded by the grant is to develop new curriculum. The grant also covers transmitter fees, and rent for the antenna along with other equipment.

“But along the way we said in order to make new classes in the field of broadcasting we needed a radio station to teach about broadcasting,” Dr. Randall said.

The prerequisite courses for student involvement on WUVI are Broadcast I and II.  These courses prepare students for managerial positions and live show broadcasts.

Students are made familiar of studio equipment and software such as consoles, telephone’s couplers, microphones, the MARTI system, streaming devices, Adobe Audition and DRS 2006.

“There’s no such thing as student involvement. It’s not just partial participation; they are running the radio station. If you take away the student aspect the station will fall apart,” Studio Manager, April Rose Fale-Knight said.

WUVI is the only station in the Virgin Islands to carry the Tom Joyner Morning Show which provides national news and includes segments of local news by U.V.I students.

“I was so nervous and scared to take on such a big responsibility,”Marisha Jno-Lewis, news director of WUVI said.

Jno-Lewis delivers the local, Co-Culture and U.V.I news within the 9 o’clock hour. “It involves me waking up at 5am to get the Daily News subscription to write the latest news,” Jno-Lewis said.  “Because the news is incorporated in the Tom Joyner Morning Show, I have a time limit of five to six minutes roughly.”

The station provides radio content of news, varieties of music, drama, politics, spoken word and educational programing. The WUVI signal reaches as far as Dominica in the south and to Puerto Rico in the east.

“We do a good job of reaching the masses, giving informed updates of news, music and what’s happening at U.V.I,” Seabrookes, host of U.V.I Insider and the regional news segment said.

The existing station is located on the third floor of Penha House on the St. Thomas campus and airs each day from 6 a.m to 6 p.m.  Students are able to develop their own content and gain hands-on experience in the radio and production field.

U.V.I students are receiving a great opportunity. “If you look around in the community there’s no other radio station that is being run by students or young people,” Fale-Knight said.