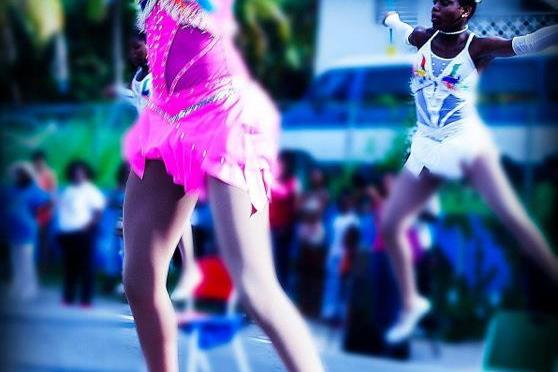 ST. THOMAS- When 19-year-old DeLanni Matthew was surrounded by friends who all wanted to become members of the Buccaneer’s Cheerleading Squad last Spring, she decided to give it a shot.

Years ago, skirts didn’t exist to her. She would put up a fight whenever someone tried to get her out of her favorite basketball shorts. Now she can be found courtside shaking her pom poms in a tiny skirt.

To most of her friends, it was quite a shocker.

“Are you serious, I don’t even know who you are anymore,” ToQuoya George, long time friend of Matthew, said.

In junior high, when all the girls in her class were having conversations about hair and nails, she often stood out.

“I was the outsider all the time,” Matthew said, “I preferred basketball.”

Cheerleading, however, wasn’t the breakthrough for her.

She didn’t quite fit the petite look of the majorettes you see competing in the World Baton Twirling Federation International Cup, but she practiced baton twirling each summer with the Lutheran Church of Reformation from the young age of seven.

For this 5’9” computer science sophomore, the change officially began eight years ago. This was when she fully dedicated her heart to the sport and began twirling professionally.

“All the girly girls call themselves fashionistas, but me I’m a batonista,” Matthew said. “Twirling for me is more than just fun – it’s a way of life.”

Matthew was one of the few Charter Members of the eight-time champions, the St. Thomas Majorettes, Inc.

“I got a phone call from the assistant director of the organization and I took her to the first practice and we haven’t left since,” Brenda Monsanto, Matthew’s mother, said. “I didn’t take her seriously because whenever I tried to get her involved in something she never stuck to it but she proved me wrong.”

Even though she had been used to performing, for her, being a cheerleader was like being a totally different person.

“Cheerleaders are supposed to have school spirit and be perky all the time and that wasn’t me,” Matthew said.

To many, Matthew is considered a star performer. Her fellow cheerleaders look up to her and expect a lot.

“DeLanni Matthew is a talented and well-rounded student. The enthusiasm and skill that she has brought to the team is a great example of what a university cheerleader should look like,” Thia Homer, captain of the Bucs Cheerleading Squad, said. “She represents us well and is always encouraging others to do well also.”

Outside of classes, she has been very involved in student organizations. She is known for her participation in the Social, Cultural and Carnival Organizing Committee in the 2012-2013 school year. Many of her peers were granted an opportunity to see her perform in the Dining Pavilion during the First Annual Carnival Week in March of 2013.

Matthew also enjoys reading, playing games on her iPad and most importantly spending time with family and friends outside of school and performances.

Though she is over the age limit to perform in the annual Carnival Children’s Parade whenever there is an opportunity to perform, on or off island, she goes for it.

“DeLanni has proven herself to be a very dedicated and talented contributing member to the majorettes,” said Alicia Gumbs, secretary of the organization. “Even though she has graduated and is attending college, she continues to give up her time in order for the group to remain a success.”

So when you see her around campus, baton or no baton, pom poms or no pom poms, feel free to ask her to show you one of her famous “Olympic” toe touches. If you get lucky, she might even teach you.

One thought on “From basketball pants to short skirts”