ST. THOMAS- One hundred and fifty students anxiously boarded the Kontiki vessel for the “Rep Your Dorm Initiation Party” on Sept. 5 by the University of the Virgin Islands as part of their annual campus initiation party.

UVI offers this event as an opportunity for new and returning students to mingle and start their school year off with a blast. 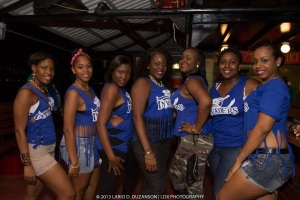 The students wore an array of colored t-shirts such as: red for Predators, green for Avengers, tan for Warriors, orange for Travelers and blue for Invaders.

Refreshments were served alongside a variation of music provided by DJ’s Kegg and Marlie.

The student initiation party is a yearly gathering combining campus residents and non-residents.

New students and returning students get the opportunity to participate in various activities and share talents such as dancing and highly coordinated stepping and chanting.

The crowd ultimately favored the Warriors for their dynamic step routine.

A campus resident described the atmosphere of the party as a success.

This year the party was chaperoned by the Dean of Students, Leon Lafond, Student Housing Supervisor, Sean Georges, and Student Counselor, Dahlia Stridiron.

Georges made note that the success of the party is determined or depended on the amount of students that are in attendance.

“This is the first time in four years with the exception of the year before that we have brought back the freshman initiation party,” Georges said. “We faced problems previously due to the low amount of support we were getting from students.”

The last initiation party was held over on John Brewer’s Bay. More students came out and were able to catch a break before the semester officially started.

Barbecues, inflatable water slides, games, music, traditional laughter and a positive atmosphere were all in attendance.

The party was considered a to be yet another success by the UVI community.

UVI students are encouraged to participate in upcoming UVI sponsored activities and parties.

By joining in the activities, students create more memories and long lasting relationships that the entire campus can “buzz” about.